About Fred, in Fred’s Words

I am the oldest of five, and forever grateful for the relatively recent (conscious) revelation that the most significant piece of my skill-set and gift was born in the first 18 months of life, where I received the singular love, attention and adulation of a 21 year-old mother happy to be on a path of child-rearing, with a father committed to providing material necessities essential to the safety and comfort of his family. Medicine Dance is dedicated to my beloved mom, Jacqueline Sugerman.

Other early developmental influences and qualities include a desire to be outside as much as possible, around or in the pond or lake or ocean or pool, in the snow, in the mud, in the hurricane, around the fire, in the sun, etc. Cub, Boy and Explorer Scouting that cultivated passion for hiking and camping and first aid and knowing what to do in emergencies. Incessant playing – cowboys and indians, batman and robin, lone ranger, army, dolls (I have always had a “feminine” side). My brothers and sister and I created miniature golf courses, carnivals, libraries, ventriloquist and magic shows, plays, etc.

Attracted to theatre as far back as the first grade, when I played “The Weatherman” at Roosevelt Elementary School, I began professional training con gusto the summer after high school on Hollywood Boulevard at the original Lee Strasburg Acting Studio. The course introduced acting as an art and a craft, and the idea that the actor’s role is not to put on masks, but rather, to take them off. A process of self-realization and pursuit of truth, rather than trickery or faking, that requires letting go of personality construct and ego, as opposed to self-adulation and quest for celebrity.

That summer of ’74 was followed by invitation into a conservatory-style university program and mentors that ignited my imagination, uncovered deep wells of emotion, woke up my body and introduced acute awareness of the origins of theatre in sacred ceremony.

Those years of training and subsequent work on stage and film and television, revealed, for me, the self-healing power of expression:  rage, grief, vulnerability, fear, violence, power, masculinity and femininity, were all required components in the roles I played, and having permission to allow the outward manifestation of those inward and most of the time hidden truths – created a sense of euphoria – relief combined with a sense of truth and wholeness. Like: I am all of these things and it is Good. And, the experience of intimacy and intensity of relationship with other people that came from the process of doing shows.

Things got a bit interrupted and turned topsy-turvy in 1978 when I was hit by car on a motorcycle, landing 50 feet from the point of direct impact on left leg’s tibia and fibula. 23 days in hospital, three major surgeries attempting to stabilize the shattered bones, and lack of confidence on the medical community’s part of my leg ever truly healing, thrust me into earnest pursuit of ways to mend the leg. Losing left leg: NOT AN OPTION. 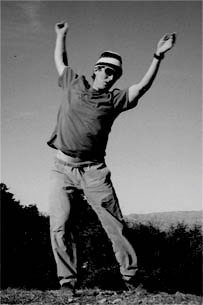 Meditation, preceded by “Energization Exercises,” were embraced through Parmahansa Yogananda’s Self-Realization teachings; yoga came through a private instructor and friend, Marget Selke. Combining the words “mind” and “body” was cutting edge back then, and largely perceived as woo-woo, but the relationship  between mind and body was all I was interested in. Copious amounts of swimming and continuation of dance classes (ballet and jazz, primarily, started in acting training) were resumed,  hugely modified.

The motorcycle mishap was a major rite of passage, and a big contributor to my fascination with the space between the performing arts and the healing arts.

Other life experiences and rites of passage that have contributed to this informal not-so-much-academic lifetime of training include:

1971 to Present – introduction to the Sierra Nevada. Mountains and forest and desert, the wilder the better, the furthest away from human habitat and development the better, have been, and continue to be Fred Sugerman’s primary source of knowledge and joy. Regular respite in wilderness is an essential component of Fred’s personal continuing education, well being and sense of self.

1974 to present – meetings and studies with master dance teachers, that have included Alfredo Corvino and his daughters, Ernesta and Andra Corvino, Jaime Rogers, Anna Sokolow, for instance.

1975-81 – ingestion of lysergic acid, peyote, psycilocibin mushrooms and other substances (not all at the same time, and less amounts than the average bird of my generation) that have been used through all time by indigenous peoples to part the veils and reveal the underlying connection between two-legged and all other life forms. And the joy in now knowing that those plants and man-made concoctions are simply tools, and that the same states of consciousness and awareness can be reached substance-free.

1984 to Present – Native American teachers, primarily located in Pennsylvania, Colorado and California, who carry the old ways and medicine of their peoples, and graciously invited me into various shades of ceremony.

1985 – my first landing at the Lama Foundation in the San Cristobal Mountains above Taos, above the Rio Grande, 10,000 feet up where the concept of “intentional community” and “circle,” in the way of council was discovered (by Fred). On these grounds, I discovered, walking down a narrow path, the possibility and freedom to spontaneously hug strangers, and on another visit, experienced the “hermit hut” at Lama and the desire/necessity in my life for alone time in places far away from others, for silence.

1990 – the birth of Kaya Allan Sugerman, April 3. The fear and resistance that I met with the news of Kaya’s conception is embarrassing and ignorant. The gifts that being a father and having anything to do with the watering and feeding of a luminous highly evolved exquisitely intelligent, beautiful and vastly loving soul are limitless. In addition to my dance with my daughter, my dance with her mom has been revelatory. The confusion, self-negation and doubt and fear and blind rage that came with failing to create a traditional contemporary American marriage have been replaced with forgiveness, eternal friendship, love and gratitude toward the woman who had the sight and the safe womb that birthed our child.

1995 – Found the Work! – the discovery of my primary movement teacher, Mariane Karou and her brilliant life training system called Dance Alive. Mariane was a devout student of Emilie Conrad and her Continuum program, and spent three decades in collusion with her gifted therapist sister, Eve, developing exercises and processes that map routes that lead to freedom and self-knowledge in people, as well as ways to explore healthy relationship.

I had been defining myself as a failed meditator for years, and through the permission to move while including All, and especially the physical sensation, I uncovered the glory of meditation and mindfulness, at its best, and in a way that was/IS accessible to me.

1996 – the meeting of the other half of Medicine Dance and my life partner/wife, Colleen Marie Sugerman. Again, lots of resistance and denial of what would inevitably unfold, I met Colleen in the Dance. We danced for years before we ever kissed. We partnered, discovered the meaning of “impersonal and intimate,” “taking really good care of our selves, while giving our partner the space to take really good care of her/his self,”  became colleagues in Mariane’s teacher trainings, and ultimately asked Mariane, and her husband, our beloved friend Richard, to marry us in 2003.

Medicine Dance has been conceived, planted, cultivated, grown and harvested through the mind and body of she and I.

Research, Ceremonies, Shows, 7 times in UK, 4 times in Hawai’i, countless client successes, long-term students, thriving community, Good Relationship, Right Livelihood, and confluence of Art, Spirit and Commerce. I am so grateful to make my living using the whole buffalo of myself, having a way of expression that serves and simultaneously deepens my knowledge of Self.